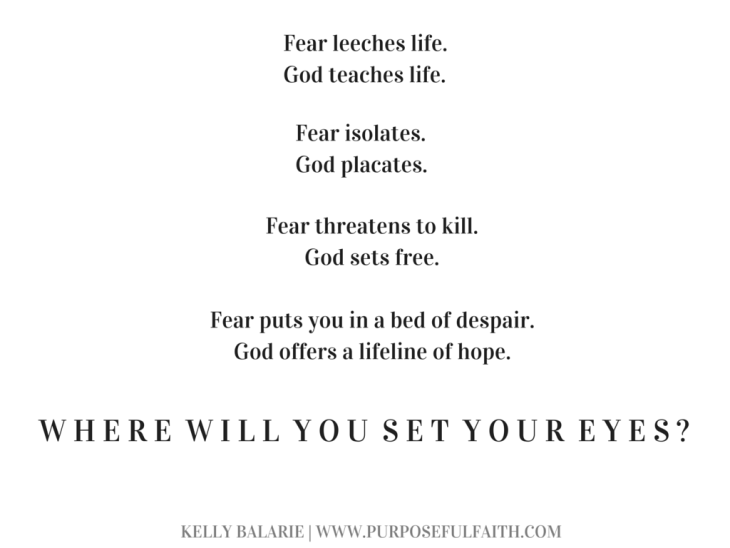 My health haunted, “Kelly, you’re going to waste into something no one will will want to love.”
My past taunted, “You were marked, damaged and used.”
My finances tricked, “You won’t make it!”
My feelings tumbled, “I can’t do this. Things are never going to work out.”

Have you experienced it?

Fear that leaves you feeling bruised, battered and wondering
where you’re rescue will come from?

Fear that leaves you laying paralyzed, comatose on a cot of uncertainty?

For me, it creates an underlying feeling that I am either not going to make it or that others will pull the plug on me.

That no one will rescue – and all will abandon.
But, someone will…

Do we see him?

It’s the great physician. And, as bad as your charts may appear or the specialists may indicate, you are not left with a sense of doom. You see, for your fears may destabilize and metastasize, but they can never tranquilize God’s power.

One pretty gal, turned queen, understood this. If she didn’t speak up, her fellow Jews wouldn’t live on. They’d die. And truly if she spoke up to the King, she would die too.

Could Esther follow God’s plan, despite the pending threat ready to kill her?

This woman needed an IV of courage.

And, she got it. Likely Esther noted that:

Fear is almost always the wall to one’s greatest calling.
Esther’s dream may have been for the jews to live free, but could she step up to the King?

It’s the superhighway that leads the opposite direction of the way, the truth and the light.
Esther could die if she spoke to the king, but could she really step up?

It usually arrives when your comfort and safety levels don’t expect it’s shock.
Esther was living in the kings court after all.

It throws big obstacles in your path that seem impossible to tackle.
Haman’s wrath on the Jews was palpable.

Did she see the details of her pain, people and problems
are never lost charts in God’s billions of files?

Nothing in all creation is hidden from God’s sight. Everything is uncovered and laid bare before the eyes of him to whom we must give account. Heb. 4:13

Her declaration in response to all of this was, “Go, gather together all the Jews who are in Susa, and fast for me. Do not eat or drink for three days, night or day. I and my attendants will fast as you do. When this is done, I will go to the king, even though it is against the law. And if I perish, I perish.” Esther 4:16

She knew her need for critical care – and she sought the right care-takers.

She didn’t lay around considering the ceiling art in her court, she:

1. Embraced the reality of the situation and didn’t halt in stagnation.
Mordecai told her she could be killed for speaking out, but still, she knew who stood above it all.

Fear can’t grow under the great physician’s light of truth. Perfect love casts out fear after all.

2. She got serious. Most fasts are just absent of food. Yet, Esther asked for no fasting from food or drink. Meaning, she didn’t take her feelings lightly and knew she needed an extraordinary, not an ordinary rescue of her feelings.

How often do you call on the prayer support of the faithful when fear starts to mount?

3. She was decisive. There was no, “I want to wear that shirt, no this shirt, no that one. I can’t decide.” She heard the truth, she got the support, she lifted the prayer and made the decision to act.

How often do you walk confidently after you have sought God confidently – trusting that the feelings may not be there, but your God is?

It’s risky.
It’s unfashionable.
It’s sometimes death-worthy.
But, it’s powerful – and we are called to it, just as she was.

Will we reach out to it when we need it?

It puts you in a bed of despair.
God offers a lifeline of hope.

Where will you set your eyes?

Linking with Holley Gerth and #TellHisStory.